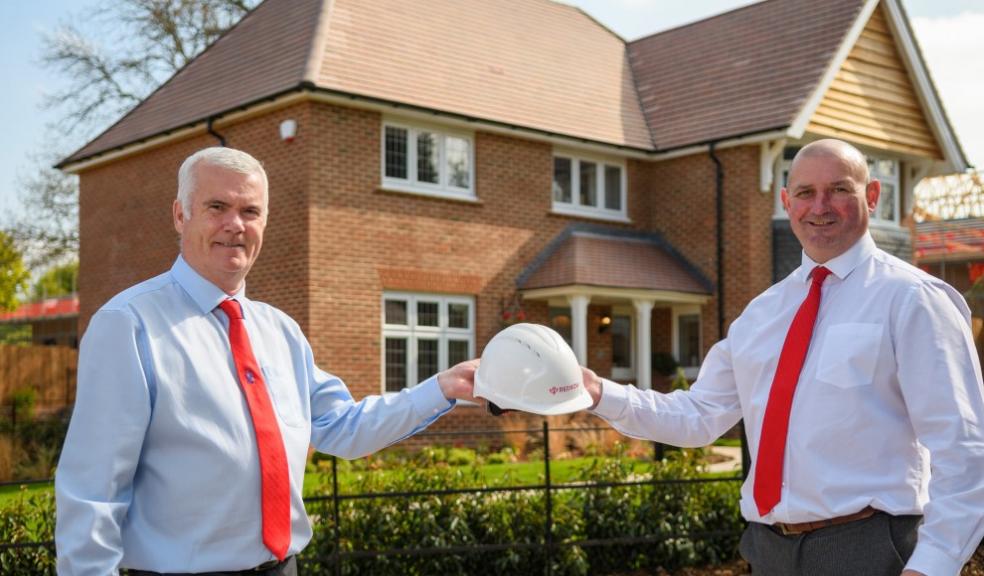 FORMER Redrow Lancashire apprentice Shaun Phoenix has been appointed head of construction for the homebuilder as Keith Collard retires as construction director after almost four decades.

Shaun, 44, started life at Redrow’s Chorley-based Lancashire division as an apprentice joiner aged 16. His rise to the top has seen him take on the roles of site manager, project manager and area construction manager, all with Redrow Lancashire, over his own 28-year career with the company.

On taking the reins from Keith, he said: “It will certainly be big boots to fill. Keith has been my mentor for such a long time and I look forward continuing to instil the core values he maintained of quality and teamwork.”

Shaun, from Leigh, describes himself as a hands-on person and a strong team player, having played rugby league for many years, so believes he was always destined for a career in construction.

He added: “I’ve never been afraid to roll my sleeves up and get stuck in so I’m looking forward to the challenge my new role will bring.”

Over his career, Shaun has won eight Pride in the Job ‘Quality’ awards, a Seal of Excellence and two commendations for health and safety from the National House Building Council (NHBC). He says he will support his team to reach the same award-winning standards, across the company’s developments in Lancashire, Merseyside and Greater Manchester.

He added: “Redrow is committed to growing its own talent and I am testament to that. If you want to work hard and build your career, the company will nurture you, provide training and back you all the way.”

Bowing out after 17 years as construction director, Keith Collard has also enjoyed a long housebuilding career. He began his work life doing what he calls the ‘grassroots’ of the job; labouring on construction sites. The 58-year-old, from Wigan, became part of the Redrow ‘family’  as a trainee assistant site manager in 1989, after starting as a forklift driver for the Whelmar Homes operation that Redrow had acquired two years earlier.

He said: “It’s been a privilege to work with some great people over the years and build some long-standing relationships with our suppliers and sub-contractors as well as giving new people opportunities to grow their career or, in the case of local subcontractors, their businesses. Redrow is like a family and loyalty always goes two ways.”

Keith’s loyalty and hard work earned him a special achievement award at the company’s Building Responsible Awards in 2019. The accolade honoured his outstanding career, during which time he has supported over 100 apprentices to take their first step on the career ladder.

Keith added: “Every one of the decades, every one of the years, has been an absolute delight. I am proud to work for a company with such a reputation not only for building homes with such quality, but for building and nurturing its staff in the same way – and it’s that which I treasure being a part of most.

“As much as I enjoy my job, the pleasure comes from seeing young people come through the ranks like I did; and helping apprentices and site managers to develop their own careers and reach their potential. I’m delighted that Shaun, a former apprentice, will be taking the reins. I know he’ll be 110% committed, fulfil everything he needs to and be a credit to the company.”

Claire Jarvis, managing director for Redrow Lancashire, said: “It’s with sadness we say farewell to Keith, one of Redrow’s most highly respected colleagues, who has served the Lancashire division for almost 40 years. Fortunately, we have Shaun, an experienced and talented member of the team, to head up the department and I am confident he will meet every challenge head on.”

Lancashire is one of Redrow’s largest operating divisions – directly employing around 150 people and delivering around 500 legal completions in the last financial year. The division is currently on site at 11 live outlets across Lancashire and parts of Greater Manchester and Merseyside, stretching as far south as the M56 corridor.

Flagship Lancashire developments include Worden Gardens, in Leyland, where Redrow is building 236 new homes and creating an extension to neighbouring Worden Park, and Sycamore Manor, in Whittle-le-Woods, Chorley, where new show homes will showcase 39 properties, including some of the most luxurious styles in Redrow’s Heritage Collection

For more on working for Redrow visit www.redrowcareers.co.uk